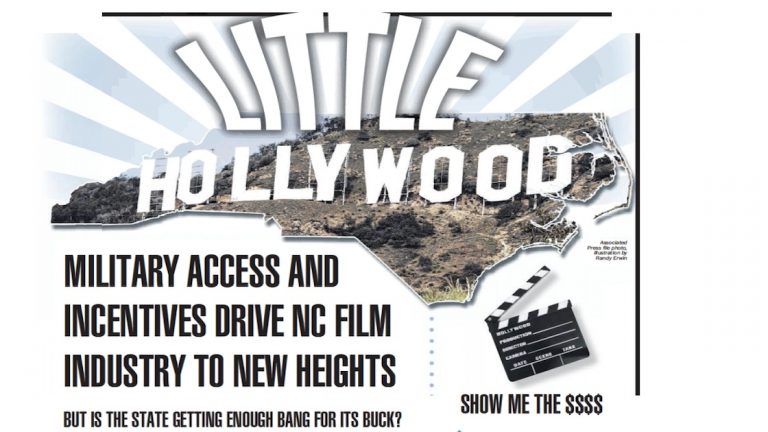 By Yaël Ossowski | Gaston Gazette
The cities of Belmont and Gastonia can boast of their role in an award-winning television series.

Broadcast on the cable network Showtime, the series “Homeland” won two awards at this year’s Golden Globe Awards, one for best actress and another for best drama series.

The local connection stems from the many scenes shot around North Carolina, more specifically on Main Street in Belmont and in downtown Gastonia last June.

“Homeland” presents a mix of Hollywood entertainment and national security drama, focusing on a wayward CIA agent’s creeping suspicions of a returning American prisoner of war.

The series explores the virtues and failures of the global war on terror, set against the backdrop of the well-funded and highly-motivated intelligence and military complex.

By filming such a story locally, the state of North Carolina has both contributed to and benefited from an increasingly enmeshed model of state-sponsored communication and entertainment, deriving direction and resources from a reputation-conscious military establishment.

In housing eight military bases and tens of thousands of troops, the Tar Heel state is set to be put in an interesting position when faced with the specter of a burgeoning entertainment industry.

A hunger for capital and jobs

Film production in North Carolina is now a booming business, creating a blockbuster haven gaining a significant reputation as a “Little Hollywood.”

According to the North Carolina Film Office, more than $220 million was spent by production companies making television series, films or commercials in 2011 alone, creating close to 26,000 jobs for crews, extras and talent in the state.

The 37 projects that registered in 2011 with the Film Office include anticipated releases such as “The Hunger Games” in Shelby, “Hornet’s Nest” in Wilmington and even an episode of “Extreme Makeover: Home Edition” in Lincolnton.

This marks a huge increase from the $75 million in production spending in 2010.

For Hollywood magnates, such as “Homeland” executive producer Howard Gordon, the biggest incentive to filming in North Carolina was the promise of a 25 percent tax credit, signed into law by Gov. Bev Perdue in 2010.

“The tax credits were great,” Gordon said in interviews during filming. “Everything really worked better here.”

The North Carolina Film Office provides up to $20 million for refunds on food, clothing and crew salaries, one of the highest amounts dolled out by state governments across the country.

And it is an offer that many producers in Hollywood cannot refuse.

In 2012, the film office anticipates hosting its biggest film to date, the highly-awaited “Ironman 3” slated to film in Wilmington.

As for “Homeland,” a smaller-budgeted television series, it is unclear what direct financial impact it has had on the local economy, especially after having filmed in Belmont and Gastonia in 2011.

In any case, the excitement surrounding the recent announcement of a second season will be sound news to Gaston County, currently suffering with a 10.9 percent unemployment rate, a full point above the state average.

By relying heavily on the theme of national security in “Homeland,” the production of the series benefited greatly from increased collaboration with military and intelligence officials.

As revealed during the promotional tour, the writers and producers often consulted with the government to stay as true to form as possible.

“We have consultants currently at the CIA who helped us tremendously,” later recounted co-creator Alex Gansa to Mother Jones magazine.

“We talked to a lot of people.”

The same was true of the blockbuster “Ironman 2,” which had a constant presence of “military advisers and people from the Department of Defense on set,” according to actor Don Cheadle.

Considering the military-dependent storyline of the third installment of “Ironman,” centered on a superhero’s unique placement between weapons manufactures and the U.S. armed forces, the city of Wilmington will likely be hosting a small village of government advisers and consultants.

But this helpful hand from the military and intelligence community in Tinseltown is nothing new.

“Entertainment media producers have wanted access to U.S. military equipment and real estate — including ships — since the dawn of American cinema,” said Phil Strub, longtime director of entertainment media for the Defense Department.

“When filmmakers come to us, and want our help to make a movie or a TV show, we see this as an important opportunity to tell the American public something about the U.S. military, and then maybe help recruiting or retention as a by-product,” Strub shared with Australian public radio.

Strub has been involved with the conjoining of the Pentagon and Hollywood for decades, serving as the chief link between a few handshakes, millions of dollars, and access to a plethora of military hardware, gear and vehicles.

He heads the film consulting of the Army, Navy, Air Force, Marine Corps and CIA, which have all opened their own entertainment liaison offices in Hollywood, just a stone’s throw away from the biggest studios in the valley.

His hands have graced famed productions such as “Transformers,” “Flags of our Fathers,” “I Am Legend,” “Black Hawk Down,” and “Jurassic Park.”

In exchange for access to official military helicopters, weapons and shooting locations, film producers must agree to the terms set by the film liaison office.

“The production must submit the entire script, and we look at it from the viewpoint of whether it meets our criteria,” explained Strub to Spy magazine.

“We let ‘A Few Good Men’ film in North Carolina for one day. But they didn’t get everything they wanted. We asked for a balance in military characters of good and bad, but all five of the main characters in that movie are depicted negatively.”

For the Hollywood practitioners of realism and the image-sensitive military brass, the budding relationship seems by all means mutually beneficial.

If the producers of “Homeland” and “Ironman” are allotted use of actual military aircraft, vehicles and technology, then they can achieve the most realistic depiction possible.

As Navy film liaison officer Robert Anderson revealed, however, that realism can only be achieved with a certain guaranteed promise of editorial control.

“If you want full cooperation from the Navy, we have a considerable amount of power, because it’s our ships, it’s our cooperation, and until the script is in a form that we can approve, then the production doesn’t go forward,” said Anderson in an interview with PBS.

“We will help with script development and make sure that everything is accurate and suitable.”

One of the most popular onscreen depictions of the military was the 1986 action film “Top Gun,” the gold standard for Hollywood-Pentagon collaboration.

Time magazine reported that for just under $1.8 million, producer Jerry Bruckheimer was given unprecedented access to warplanes and aircraft carriers, as long as he was willing to change Goose’s death—originally a midair collision.

The stunning realism and patriotic themes provided undue amounts of success for producers and military recruiters alike, earning more than $300 million at the box office and inspiring a three-fold increase in recruitment for Navy shortly thereafter, according to the Los Angeles Times.

Some critics point to this scenario of Pentagon intervention in moviemaking as problematic.

When “Top Gun” opened in May of 1986, military recruiting tables were “proudly set up outside theaters so as to answer questions” for any potential future pilots, said David Robb, author of Operation Hollywood: How the Pentagon Shapes and Censors the Movies. “They know that it works. People are going off to war and getting killed, in part because of some movie that they saw that was adjusted by the military.”

“Writers write stuff to get that military assistance. So there’s no documents saying, ‘In Black Hawk Down, let’s leave out the whole part about the soldiers being dragged through the streets of Mogadishu,’” said Robb. “This chronic sanitization of the military and what war is has affected the American character; that we’re now a more warlike people than we were 50 years ago.”

The most recent example of the Hollywood/Pentagon collaboration is the Navy action flick “Act of Valor,” released on Feb. 24.

Unlike hits such as “Top Gun” or “Black Hawk Down,” this production began outright as a recruiting spot, according to Navy film liaison officer Robert Anderson.

“Once they started piecing everything together, they realized it could actually be used as a full-length feature picture,” Anderson said.

The movie depicts actual active-duty Navy SEALs shooting live rounds and sporting reconnaissance gear in dramatized scenes and scenarios, adding to their profile boosted by recent highly publicized missions of hostage rescues in Somalia and the killing of Osama Bin Laden in Pakistan.

This is similar to the military’s foray into the world of video games, culminating in the enormously-popular online game America’s Army.

After spending close to $3.28 million and attracting more than 9 million players in just five years, the Massachusetts Institute of Technology found that “30 percent of all Americans age 16 to 24 had a more positive impression of the Army” because of the game.

It also found that “even more amazingly, the game had more impact on recruits than all other forms of Army advertising combined.”

The future of Little Hollywood

As the entertainment industry sets its sight upon the Tar Heel state, the shadow of the military-consulting complex will inevitably follow.

With hits such as “Homeland” or “Ironman” calling North Carolina home, the future of Little Hollywood remains open to big-budget features with popular depictions of the U.S. military and intelligence.

For the North Carolina Film Office, this furthers the need for economic incentives offered to production companies in exchange for bringing an industry from across the coast.

“We are delighted that the industry is once again providing high-paying, quality jobs for our residents and having a big impact on business and local communities,” said state film office director Aaron Syrett.

The measure of economic impact will be difficult for North Carolina to calculate, but considering the success of films and series such as “Act of Valor,” “Ironman” and “Homeland,” the state seems poised to become a significant actor in the game of Hollywood/Pentagon collaboration.

Published in the Gaston Gazette.