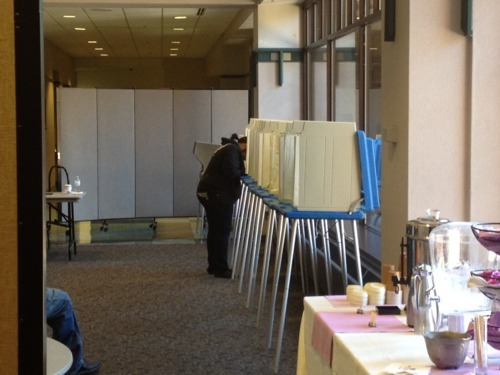 MILWAUKEE — At Marquette University in downtown, the line to vote extended past the entrance of the door and turned left down a hallway of offices.

Students with backpacks stood alongside dozens of parents towing child behind them, giving them a glimpse of the tranquil process that has been preceded by so much discord, disunion and disagreement among friends and families in the state of Wisconsin.

More than 19 months after voters last where given the option of Republican Scott Walker and Democrat Tom Barrett for governor, they were being asked to make the same choice — and early exit polls confirm that the results won’t be too different from the previous go around.

In the very front of the line at Marquette, three poll workers flipped through 2-inch notebooks filled with paperwork procedures to help previously unregistered voters make their vote count on election day.