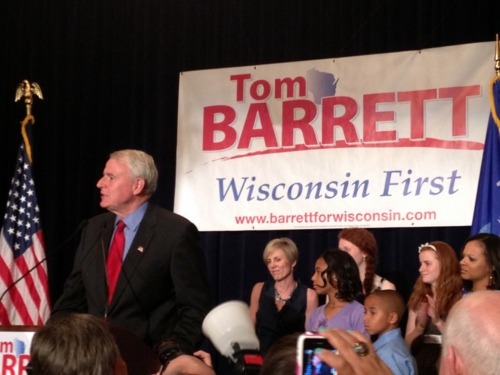 MILWAUKEE— The crowd downtown was mum by 9 p.m. at the election night rally for supporters of Democratic gubernatorial hopeful Tom Barrett.

Eyes were glued to the large plasma screen television in the corner, where MSNBC host Rachel Maddow was breaking the news that projections from her own news organization called a win for Barrett’s opponent, Republican Gov. Scott Walker.

The loud cheers and jubilant smiles that once were shared among the crowd were now expressed only on the television, in a live shot of the opposing Republican rally where the more numerous supporters of embattled governor Walker celebrated the projected victory.

The Rev. Jesse Jackson, a prominent civil rights activist who campaigned actively for Barrett, stared blankly at the live results feeding in and calmly shared words with his staff.