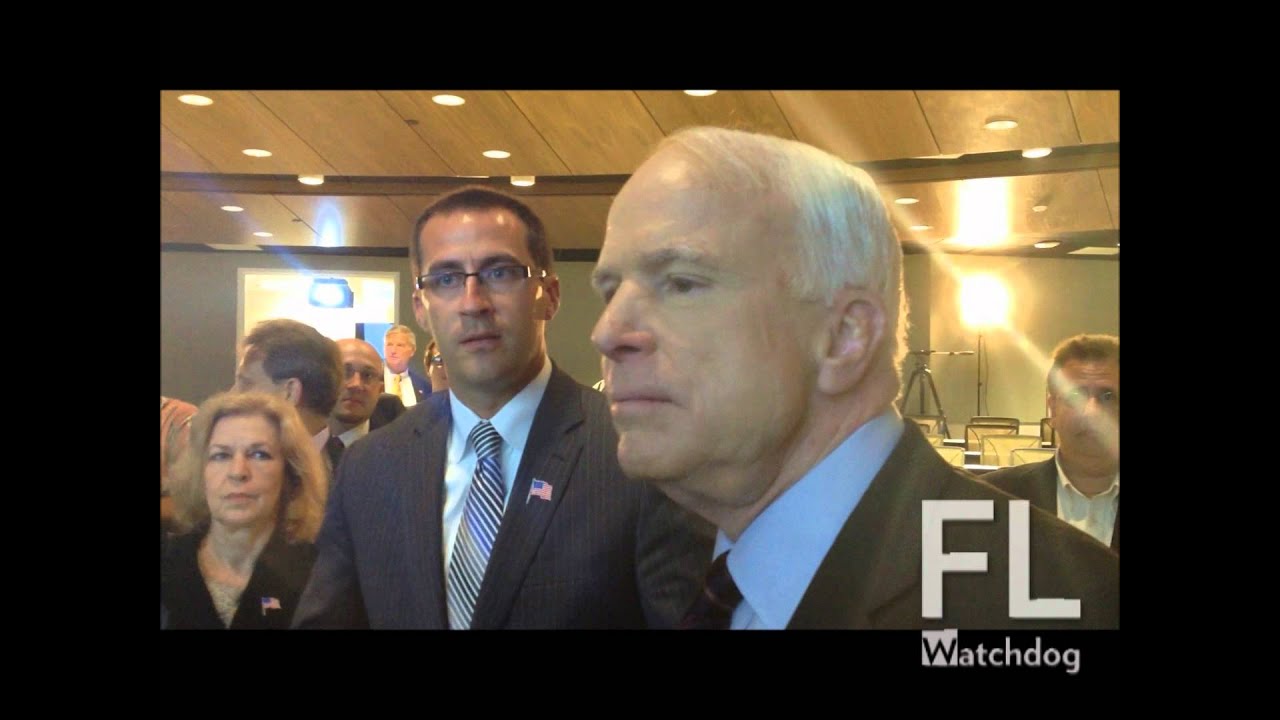 TAMPA — If the proposed cuts to the military budget are not stopped immediately, the United States would be unprepared and unequipped to fight any future wars — despite the growing danger of a deepening national debt.

That was the message delivered Monday at a town hall event downtown, where U.S. Sen. John McCain, R-Ariz., spoke to local city council members, defense industry representatives and residents about the importance of federal defense spending in the local economy.

McCain, joined by Republican U.S. Sens. Lindsey Graham, of South Carolina, and Kelly Ayotte, of New Hampshire, spoke at great length about the dire scenario expected when sequestration cuts to the U.S. Department of Defense budget go into effect on Jan. 1.

The more than $500 billion in cuts promised over the next decade, or just $50 billion a year, were enshrined into law because of the failed efforts by the Joint Select Committee on Deficit Reduction, better known as the Super Committee, to afford significant bipartisan cuts to the federal budget in November 2011.

The question of the proposed cuts has drawn complaints from Democratic and Republican members of Congress, practically guaranteeing the cuts will be a significant topic of contention during the run-up to the general election in November.

“These cuts, the way they’re written in the law, they’re just unacceptable to the industries and people of Tampa,” said Buckhorn, a Democrat.

McCain expounded on the importance of the Defense Department to the jobs and livelihoods of all people in the Sunshine State, going so far as to say that MacDill Air Force Base would see a “significant loss of personnel” if the cuts occurred.

“These cuts — which I would just call downright draconian — are set to affect close to $3.6 billion in the state of Florida alone,” said McCain. “We’re looking at $1 trillion in cuts to national defense. That is unacceptable.

“If we allow these to go through and the budget is slashed, it will have a devastating impact on our children and grandchildren,” said McCain, channeling the exact language of House Democrats who criticized the proposed budget of Wisconsin U.S. Rep. Paul Ryan, when it was introduced for debate.

Ayotte, who has been rumored as a vice presidential pick for presumptive GOP nominee Mitt Romney, focused on the economic impact it would have on military contractors in the state.

Ayotte cited the cuts looming over multi-billion weapons manufacturer Lockheed Martin as a specific example. She said CEO Robert Stevens told congressional leaders that he is prepared to send out “layoff notices,” threatening to put “up to 100,000 Americans out of work by the election.”

“Think about those families. Think about putting those workers in that position. That is why this demands leadership now,” Ayotte said.

“When you look at the money spent on the Defense Department in historical averages, we’re at the low end, 4.7 percent of (gross domestic product) being spent on defense. Since (World War II), that’s near the bottom,” Graham explained.

“Are we living in times that are not very dangerous, so you can afford to have that kind of spending? I would say not. I’m not looking for a fair fight, are y’all? I want our guys to have stuff that no one else has got. I want wars over quickly because the longer it goes, the more people die and suffer,” said Graham.

Six-year-old Kelsey Verbal, grabbing the microphone to question the senators, drew a round of applause for her question on unemployment, a consistent concern for residents who were called upon during the town hall.

Ayotte reiterated her point about the importance of federal defense dollars to local military contractors in the region.

However dire the circumstance painted by the speakers, not all attendees were opponents of the defense cuts.

“We need a strong national defense,” said Gene Jones, founder, and president of Florida Veterans for Common Sense, an anti-war group of veterans based in Sarasota.  “But what we have is a bloated, extravagant national defense.

“The Defense Department right now does not account for the money it spends. What other agency — what other business — can get through life like that?

“This kind of extravagance has to stop. Our country can’t afford it. We’re weakening our country.”

Only McCain interrupted to assure that other speakers would have time to address the lawmakers.

“The only money that should be appropriated for Afghanistan should be to withdraw our troops. That’s it,” Jones later told Florida Watchdog.

“Why do they want to create more havoc and invade more countries,” asked Jones. “It just doesn’t make sense.”

Jones’ early comments might not have been addressed succinctly by McCain, but they have been the subject of some of his prior speeches.

Taking to the Senate floor on Dec. 15, 2011, McCain exposed what he labeled the “military-industrial-congressional complex,” the intricate association between military contractors and lawmakers who pursue an agenda of war for lucrative contracts instead of actual threats to national security.

“The 50th anniversary of President (Dwight) Eisenhower’s address (on the military-industrial complex) presents us with a valuable opportunity today to carefully consider: Have we heeded President Eisenhower’s admonition?” asked McCain.

“Regrettably and categorically, the answer is, no. In fact, the military-industrial complex has become much worse than President Eisenhower originally envisioned: It’s evolved to capture Congress.”

Concerning these comments, Florida Watchdog questioned McCain on why his attitude had changed on the connection between military contractors and the Defense Department, whom he was defending at the town hall.

“I go to the floor every week or two, I fought for hearings and I’ve attacked over legislative leaders,” assured the former Republican presidential candidate who lost out to President Barack Obama in 2008.

“I fight it every day. What I’ve been warning about is a program like the F-35 has turned into a trillion-dollar weapon system. It should have never happened,” McCain told Florida Watchdog.

“But members of Congress have the incentive to continue that,” said McCain before being pulled away by a Republican aide.