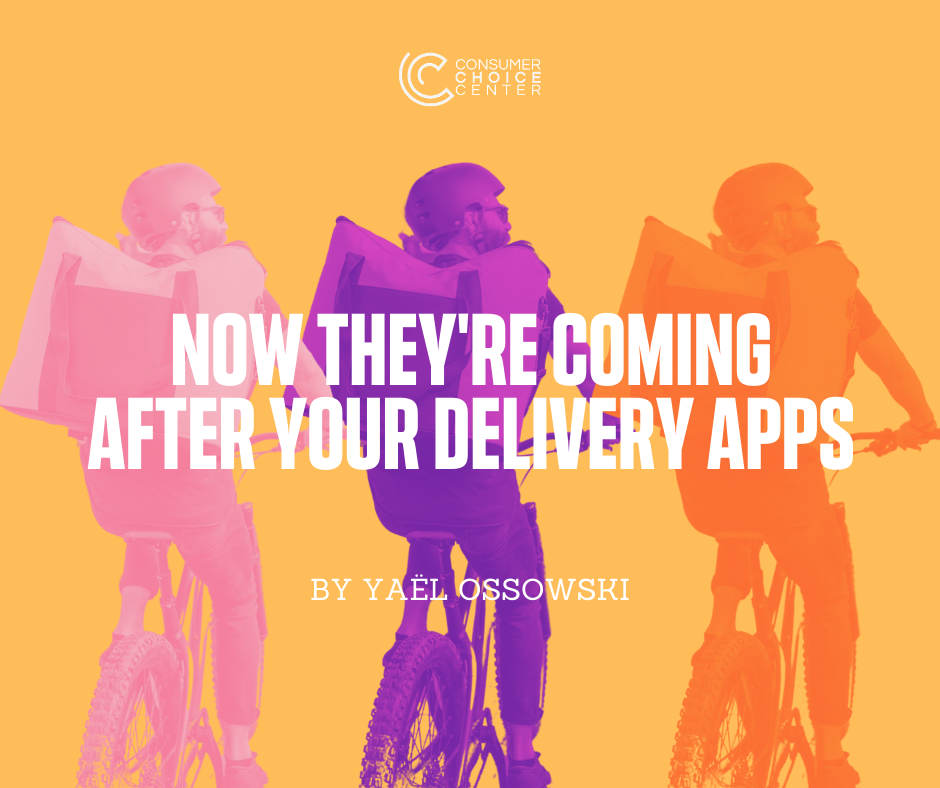 Throughout the course of the pandemic, the world of commerce has shifted primarily online. That’s made online retail, digital services, and delivery apps a godsend for millions of us sequestered in our homes.

This entirely new sector of the economy has allowed us to safely buy, enjoy, and use goods and services without the risk of coronavirus. Now it’s possible to enjoy the best drinks and food in just a few minutes, delivered by courier straight to your door.

Alas, no: a group of organizations is looking to upend and halt those deliveries of restaurant meals to your home.

A new coalition calling itself Protect Our Restaurants is calling on state and local government to cap the commissions allowed on delivery service apps, and for the FTC to take action against delivery companies like Grubhub, Uber Eats, Postmates, and Doordash.

That would severely affect your ability to hit up a delivery app for a hot meal at your convenience. What gives?

The coalition is made up of organizations such as The American Sustainable Business Association, The American Economic Liberties Project, and the Institute for Local Self-Reliance, with the stated goal of “persuading policymakers to regulate food delivery apps so they can’t use their market power to exploit restaurants and take money out of our local economies.”

They claim delivery companies, the same ones that have empowered consumers, given vast new capabilities to restaurants, and provided good income to couriers, are “exploiting” each of these groups in pursuit of the almighty dollar.

The same claims were made in a class-action lawsuit filed earlier this year by consumers in New York who claimed these companies “prevent competition, limit consumer choice and force restaurants to agree to illegal contracts”. We’re no strangers to lawsuit abuse.

There are more than a few reasons to believe they’re wrong.

Earlier this year, pre-pandemic, the NPD group estimated delivery orders in the United States to represent just 3% of all restaurant orders, and it’s risen as high as 7% in July 2020. Likely more now.

That means more and more customers are using food delivery apps to get the food they once ordered in restaurants, but to their homes.

Even before then, a prime complaint area of the coalition mentioned above and similar parties is the commission charged by these various food delivery apps as a fee for delivery and all other services they provide.

For orders placed through a delivery app to a restaurant, the app charges either a flat or percentage-based fee as a commission, which funds the logistics, the courier’s pay, and marketing costs associated with being in the app. This amount varies between 13.5% and 40%, depending on which options a restaurant agrees to when they sign up.

It’s that variance in commission rates that so enrages activists in this space. In one highly-circulated Facebook post, one restaurant owner claimed Grubhub collected more than 60% in commission (another look reveals the owner also paid for promotions and discounts on the app, and also had several cancellations and adjustments that would account for the larger share in commissions charged by Grubhub). Add to that plenty more anecdotes of high fees circulating social media.

In response, the cities of Washington, D.C., Seattle, and San Francisco have already capped commission rates at 15%, and a bevy of other city councils are lining up to join them. Many activists are now calling on more cities to do the same, and even lower the cap down to 5%.

While these caps on commission are well intended, they are actually counter-productive.

It will mean fewer order volumes that can be processed, less money will be available to couriers who sign up to deliver for the app, and higher prices to compensate for lost income. That would hurt restaurants, couriers, and consumers themselves who depend on these services.

And considering these apps offer quality marketing services as well as delivery for the restaurants on these services, there will likely be fewer resources available there as well. If you don’t have the capital to brand a Grubhub or Uber Eats, how can you expect to draw in customers?

Overall, a sweeping restriction on commission rates would degrade the quality and quantity of the delivery services, and end up hurting more people than it purports to help. That would be both anti-consumer and anti-innovation in the same fell swoop.

Much like the Congressional hearings against Apple, Amazon, Facebook, and Google some weeks ago, this coalition wants to use the weapons of the federal government through the Federal Trade Commission to break up the “monopoly power” of delivery services, mainly Grubhub, Uber Eats, Postmates, and Doordash.

With the exception of Grubhub, each of these companies (or subsidiaries in the case of Uber) has existed for less than 10 years. They’ve pivoted multiple times, expanded their services, and finally found a good niche empowering restaurants to quickly and reliably get their food to delivery customers.

At the same time, thousands of delivery workers have been able to get quick and easy work through the apps, giving needed income to students, those between jobs, and people who want extra income. These couriers often contract with multiple services, depending on whichever company offers the highest commission per delivery, similar to rideshare drivers.

Because every restaurant is free to contract its own delivery service or operate their own as was the case for many years, it’s hard to argue that a monopoly exists –– especially if there are more than four dominant players who provide delivery. That’s far from requiring antitrust intervention.

The benefits to restaurants seem clear: less money is spent on hiring a dedicated delivery driver or vehicle, commissions charged are consistent and transparent (whatever their amount), and partnering with a well-known app helps attracts more users who otherwise would never order from that specific restaurant.

Add to that, most of these restaurants likely never had delivery before they signed up for these apps, meaning they went from $0 profit to much more in just a few clicks.

If those costs weren’t worth it to restaurants, they’d start their own delivery services independent of these companies. That was the status quo before any of these companies arrived on the scene, we should remember.

Beyond that, if any of these companies have engaged in any illegal activity, such as promoting fraudulent websites or phone numbers, as the coalition alleges, then this should, of course, be investigated. But that falls outside of the domain of using antitrust laws to break up delivery companies that are providing valuable services to both consumers and restaurants.

If parties are aiming to regulate food delivery companies and are successful in doing so, they’ll set up a paradox of their own making: the only companies that will be able to comply with the regulations and caps will be the delivery firms with the most capital and resources. This would lock out any potential new competition and do more to restrict consumer choice than enhance it.

The last few months have provided each and every worker and consumer with plenty of uncertainty. Being able to order products right to our door, though, has been a blessing. Intervening in the market to undermine the choice of consumers and business contracts with restaurants would make that process arguably worse, and not better.