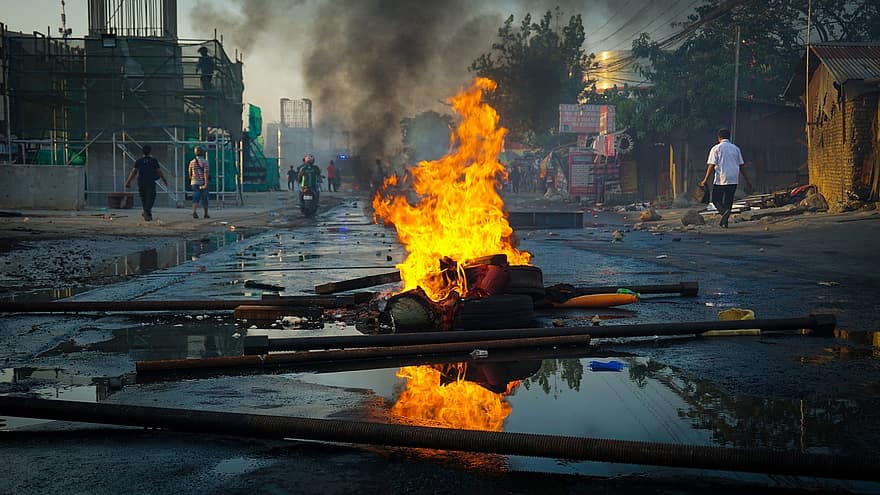 Amid a pandemic of unprecedented proportions, U.S. cities like Portland, Chicago, New York, Atlanta, and Seattle have sweltered in the summer heat and raged with flames. Passions have run wild in the streets, with buildings and businesses torched, and statues torn down by mobs intent on vigilante justice. In fact, “social justice” has risen from the ashes to become the new dogma du jour and being “woke” is in vogue.

To those of us watching from afar, this was a moment we could have predicted. Though many have been reluctant to admit it, certain demographics in the U.S. have indeed faced forms of injustice: unjustified killings at the hands of law enforcement, discriminatory policies in minority neighborhoods, and a justice system that has been all but equal and fair. With the death of George Floyd at the hands of Minneapolis police officers, the resentment harbored by too many Americans has been revealed, and their rage has been given a voice.

For social activists like those in the Black Lives Matter (BLM) movement, Floyd’s death symbolized the prejudice they claim runs rampant in American society. It’s not just on the cop’s beat, they insist, but also in the workplace, classrooms, and every interpersonal relationship between Americans of every race. But is this an awakening or a reckoning?

On social media — where most of us have been sequestered during extended lockdowns and quarantines — photos of vacations and social gatherings have been replaced with political slogans and calls to action. Politics has become central to every conversation, and every public statement and meaningful interaction is measured in terms of its alignment to the politics of the day. Social justice, we are told, is not just a “calling” but an “obligation.” And anyone who denies this is considered a “racist.”

All this has produced an overarching sense of malaise in many individuals. We increasingly self-censor to avoid losing our jobs or our friendships. While most people are not themselves racist, the onus is now on everyone to prove that they are explicitly sympathetic with the BLM movement. On this, apparently, there is no room for debate, a consequence of ideological thinking.

As Andrew Sullivan points out, the rise of critical theory and post-modernism over the past several decades poses a serious threat, since such ideologies deny the very existence of objective truth, instead elevating subjective reality as our moral compass. Of course, we recognize instances of oppression and do our best to remedy it. But this cannot be achieved by forcibly removing statues of the Founding Fathers or Cervantes, ransacking middle-class businesses or assaulting people on the street.

That injustice exists and has always existed is not open to question. But how to address injustice — whether peacefully, through our existing institutions, or haphazardly through violence and intimidation — is a serious question that requires serious answers. Applying identitarian or race-based policies, as Antifa, BLM, and their “woke” allies wish, is not a serious answer.

The present moment is typified by an intense revolutionary zeal — one that many émigrés from the former Soviet Union, Cuba, Venezuela, and other totalitarian nations readily recognize as dangerous and harmful to individual liberty. The ideological fervor exhibited by the Antifa / BLM protesters reminds many people why they left such places in the first place.

The clashes in the streets between Antifa / BLM sympathizers and MAGA-hat wearing partisans are more than just mob skirmishes. They represent a breakdown of the order that our institutions were built to deter. They embody the illiberal impulses that civilization is supposed to keep at bay. It’s smacks of what the editors at Commentary magazine call “The Great Unraveling.”

Because of their destructive nature, revolutions are tools of last resort, to be used only when all other options have been exhausted. When revolutions are sought for a higher purpose — as was the case with, say, the American Revolution — there is at least something to strive towards, as well as an honest debate about its merits and dangers. Unfortunately, modern revolutions — like those in 20th century Russia, China, or Cuba — have consistently been hostile to liberty because their goal was simply the destruction of the status quo. This is akin to what we are now seeing with the protests in the U.S. and elsewhere.

Rather than abandon or erase our past, it is time to forcefully articulate the ideas and principles that have helped build the greatest democratic experiments of the last few centuries. These are universal principles — i.e. free expression, freedom from oppression, freedom of religion, and the rule of law — that have been proven to expand human freedom, ensure wealth and prosperity, and foment well-being. If such principles are not part of how we shape our future, how can we be certain about what awaits us on the other side?

We can all agree that “black lives matter” while rejecting the narrow identitarian message of Black Lives Matter. In the same way, we can sympathize with those who wish to improve society without necessarily endorsing their illiberal prescriptions. What we cannot support are modern revolutionaries — whether of the left or right — who wish to use intimidation, torches, and indiscriminate violence to radically recreate our societies according to their narrow vision of utopia.

We must instead remain “lovers of freedom and anxious for the fray.” That is the only way to avoid the horrors that otherwise await us.

Yaël Ossowski is a Canadian-American writer living in Vienna.

This article was published in the European Conservative.