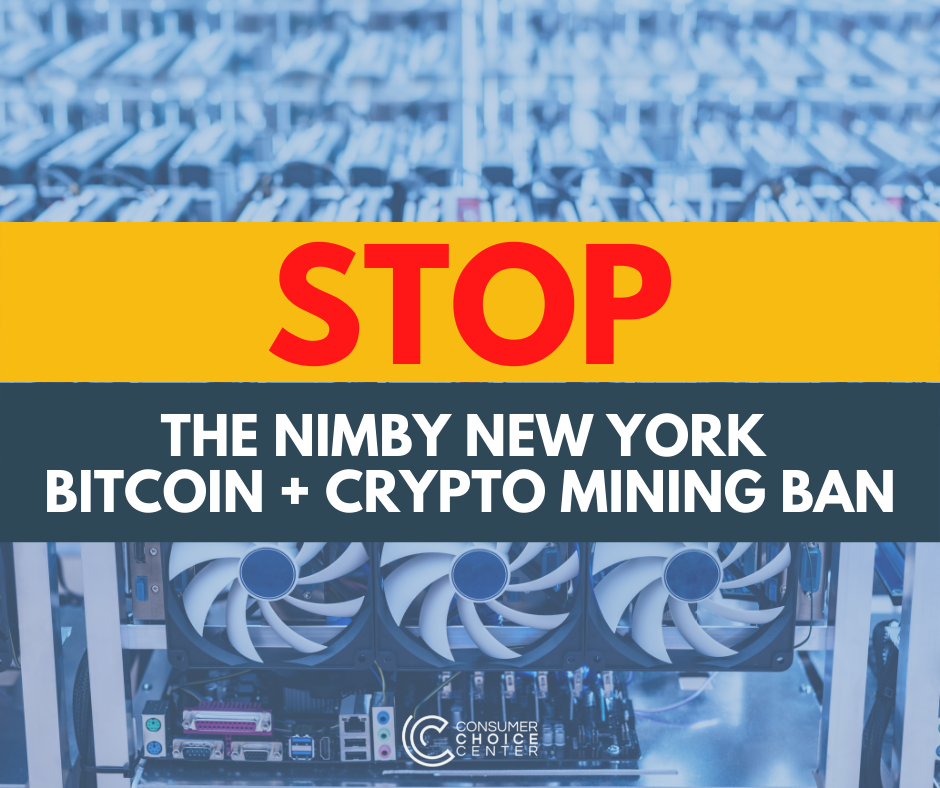 Albany, NY – Early this morning, the New York State Senate joined with the State Assembly to pass a moratorium on Bitcoin and cryptocurrency mining, issuing yet another reminder that state lawmakers want to deny their residents from interacting with cryptocurrencies.

The law would prevent new permits from being issued to carbon-based fueled proof-of-work mining operations that use behind-the-meter energy, putting millions of dollars worth of investments into jeopardy. This follows the logic of the much-derided BitLicense regulation, which has made it nearly impossible for small and medium-sized firms to offer crypto services to New York residents.

“By passing this bill, New York lawmakers are unequivocally stating they want their residents completely locked out of cryptocurrencies, from generation and mining services to actually being able to easily buy them through an exchange,” said Yaël Ossowski, deputy director of the Consumer Choice Center, a consumer advocacy group.

“If Gov. Hochul signs this bill, it will drive a stake through the Bitcoin mining industry, and states like Florida, Montana, Utah, and Texas will rejoice at the opportunity to invite those entrepreneurs and innovators to establish operations in their states.

“Because Bitcoin, and cryptocurrencies more broadly, will serve a vital role in making finance more inclusive and accessible for sending, receiving, and saving value, we hold it in the interest of consumers that the hashrate (the total computing power of the network) continue to grow, and that better public policy on cryptocurrencies is embraced among states.

“New York, however, has decided to take the NIMBY approach and deny their residents that opportunity,” added Ossowski.

“Cryptocurrency generation and mining firms have an incentive to use the most affordable and renewable energy sources available, and the data backs up this claim. This is a win-win scenario for towns and localities with these facilities, for employees of these firms, residents in these towns that benefit from increased commerce, and energy customers overall,” said Ossowski.

“As cryptocurrency mining proliferated in New York, it opened up new entrepreneurial activities that helped improve the lives of New Yorkers in small communities and large urban centers alike. Passing a ban on these activities, in pursuit of an unclear climate goal, will negate these gains. There is a better path,” added Ossowski.

“The aim of embracing climate goals to ensure 100% renewable energy usage in cryptocurrency generation and mining is well-intended, but a complete ban will have a devastating impact on innovators and entrepreneurs hosting their facilities in the state of New York, and consumers and investors that rely on their services,” said Aleksandar Kokotovic, crypto fellow at the Consumer Choice Center.

“We understand that the quick rise of cryptocurrency mining raises many questions for residents, particularly when it involves the local economy and environment. However, a more prudent path would be an environmental review conducted by relevant authorities, rather than a wholesale ban and moratorium that would put many projects in legal jeopardy,” added Kokotovic.