Zoning reform should be an election priority

For the sake of the international order, we need Biden to sell more gas

by Yaël Ossowski TAMPA — Just three weeks before the filing deadline, Florida‘s U.S. Senate candidates are pulling out all the stops to catch Democratic incumbent Bill Nelson. The two-term senator has amassed close to $1.6 million in the first three months of 2012, bulking up the $8.4 million he raised last year, according to his re-election campaign. Read more: Statehouse […]

by Yaël Ossowski Hey Citizen, you’re the first to hearWe’ve got a new war to start, so strap on your gearPut on your blinders and heed what they sayNot time for questions, it’s time to obey Forget Palestine, forget occupationForget the bombs and the sanctions that have killed a nationForget the coups and states we’ve […]

There is nothing more precious than playing the odds and winning. On any given day, Gaston residents queue up at gas stations and grocery stores to gamble an average $4 of their weekly pay in hopes of getting lucky and winning big in the State Education Lottery, celebrating its sixth anniversary on March 30th. For […]

Recently, I was invited to participate in the discussion on ‘The Stateless Man’ with radio host, economist, and all-round world citizen Fergus Hodgson. … READ ON LIBERTY IN EXILE 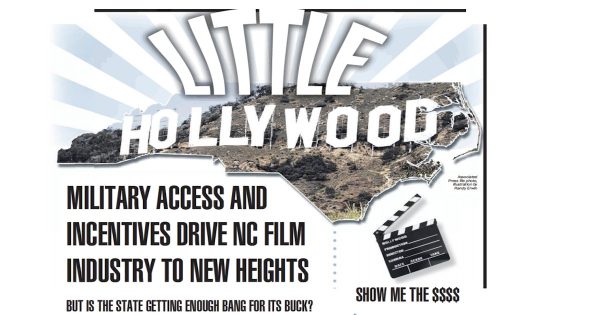 Military access, incentives drive N.C. film industry By Yaël Ossowski | Gaston Gazette The cities of Belmont and Gastonia can boast of their role in an award-winning television series. Broadcast on the cable network Showtime, the series “Homeland” won two awards at this year’s Golden Globe Awards, one for best actress and another for best […]

Does military’s relationship with NASCAR cost taxpayers? It is a sport which has never been ashamed to cater to nationalism. Sundays at a NASCAR race are awash with American flags donned on T-shirts, race cars and beer koozies. Thousands of fans camped out at the racetrack proudly fly the stars and stripes from the flagpoles […]

There is no doubt that even the most casual web surfer has, in recent days, been exposed to the Kony 2012 campaign on Youtube and throughout social media. In a matter of days, the video has garnered tens of millions of views, while enjoying significant coverage in the mainstream press, radio and television. The video was released by the […]

It is a new battle for civil rights, say opponents of the gay-marriage ban slated for a popular referendum. Proponents, however, view it as the last defense in the fight to protect traditional marriage against the whims of a future Legislature or activist judge. Two months away from the vote on Amendment One, the opposing […]

Gaston County Police officers were ecstatic when they unveiled the department’s shiny drone aircraft to the public in 2006. Equipped with low-light and infrared cameras, the unmanned aerial vehicle known as the “CyberBug” was promised to deliver sweeping surveillance, tactical operational support during raids, extensive crime scene photography and a bird’s eye view of hidden […]